“…Consistently intelligent playing wins out over purely beautiful tone,
which here is just right…”  The Observer

The Matangi Quartet was founded in 1999 by four young musicians then studying at the Royal Conservatoire in The Hague and the Conservatory of Rotterdam. In 2003 Matangi completed the two-year, full-time course at the Netherlands String Quartet Academy under the direction of Stefan Metz (cellist, Orlando Quartet). At the Academy, the Matangi Quartet had the opportunity to take lessons from international renowned musicians, including the members of the Amadeus Quartet. The quartet also received intensive mentoring from Henk Guittart (violist, Schönberg Quartet) for several years.

The Matangi Quartet has since developed into a regular performer in the Dutch chamber music scene and abroad. With their impassioned playing and smart presentation, Maria-Paula, Daniel, Karsten and Arno epitomize a new generation of classical musicians. They are often characterized by words such as communicative, provocative and refreshingly versatile. The Matangi Quartet has shared the stage with various top-class classical musicians such as Miranda van Kralingen, Tania Kross, Ivo Janssen, Paolo Giacometti and Severin von Eckardstein. The quartet has also been invited to perform in various festivals, including the Delft Chamber Music Festival, the Aix-en-Provence Festival, the Schleswig-Holstein Music Festival, the Carthage Festival in Tunisia, the World Expo 2010 in Shanghai, the International Conservatoire Festival in St Petersburg and the North Sea Jazz festival in the Netherlands. In 2019 they had their debut in Carnegie Hall, New York.

Matangi regularly participates in innovative crossover projects and has performed in collaboration with artists such as cabaretiers Herman van Veen and Youp van ’t Hek, bandoneon player Carel Kraayenhof, jazz trumpeter Eric Vloeimans, jazz pianist Michiel Braam, DJ Kypski, jazz vocalists Mathilde Santing and Renske Taminiau, singer songwriters Lori Liebermann and Tom McRae. These pioneering excursions beyond the borders of classical music have resulted in Matangi winning an enthusiastic new public for the string quartet. No less important, this has provided a source of inspiration for infusing performances of the rich classical repertoire built up over the past 250 years – from Haydn to Adès – with new élan. For essentially, the Matangi are focused on just one thing: letting the audience palpably experience the energy, passion and excitement that is inherent in all good music.

All four musicians perform on instruments of Dutch workmanship. The cello and first violin have been provided on loan by the Dutch National Musical Instrument Foundation.

Matangi is the Indian goddess of speech, music and writing. The vina that she carries in her hand is an instrument that produces deep sounds with pleasing overtones. Matangi transports her listeners with her playing on the strings of passion, fervour, love and ecstasy.

An ode to the Opera.
Matangi Quartet and Esther Kuiper, mezzo soprano. 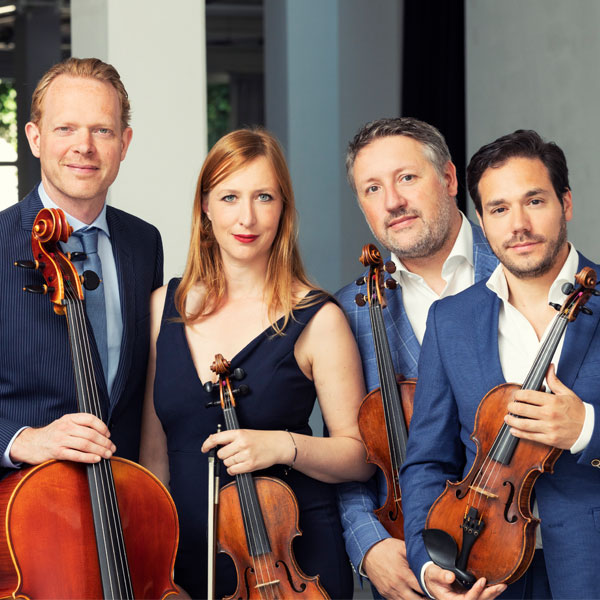 “…There are no words to describe this. I would say, sit down, close your eyes, relax, empathize, enjoy the unadulterated but so very sharp expression and be amazed at the discovery that beauty simply is and does not need to be made…”   Luister Magazine, 30 April 2020