Mikhail Zemtsov is an internationally acclaimed and versatile musician. He combines his busy career as a prominent soloist and conductor with chamber music and teaching.

Mikhail Zemtsov took his first violin lessons from his mother Loudmila Levinson at the age of 5, later studying viola and composition at the conservatories of Moscow, Hamburg and Maastricht with G. Odinets, B. Dinerstein, M. Nichetianu, M. Kugel.

Mikhail is member of the Utrecht String Quartet and the Duo Macondo (with the guitarist Enno Voorhorst). Mikhail also founded an unique ensemble – Zemtsov Viola Quartet – together with his wife Julia, daughter Dana and nephew Daniil, all of them prominent viola players who studied with great viola virtuoso Michael Kugel.

Mikhail Zemtsov is appointed viola teacher at the Royal Conservatory of The Hague and Utrecht Conservatory (Netherlands). Many of his students became prize winners at International Competitions.

Mikhail has been principal conductor of Utrecht Conservatory Strings and Atheneum Chamber Orchestra. Since 2010 he is conductor of the Young Talent Symphony Orchestra from the Rotterdam Conservatory. He received invitations as guest conductor from orchestras in Netherlands, Belgium, Italy, Spain and South America. He has worked with soloists like Janine Janssen, Dmitri Makhtine, Atar Arad, Gavriel Lipkind and Malibran Quartet.

Every summer Mikhail teaches orchestral conducting to the choir conductors at the Kurt Thomas Course in the Utrecht Conservatory.

Mikhail has participated in numerous International Festivals in Europe, Far East and the Americas as chamber music partner to Bella Davidovitch, Boris Berezovsky, Dmitri Sitkovetski, Sarah Chang, Janine Jansen, Julian Rachlin, Misha Maisky; the Leipziger, Jerusalem and Borodin quartets. He has recorded numerous CDs for Sony Masterworks, Tower Records, Deutsche Welle, Ottavo, D&G, as well as recordings for TV and radio. His Solo CD “The Last Rose of Summer” has been placed as number 2 among Top 50 of the TROS – Dutch Broadcast/TV Channel and it has got 9 points (excellent) in the main Dutch recording magazine “LUISTER”.

His 2016 recording for Chandos label of Rapsody – Concerto by B. Martinu with Maestro Neeme Jarvi and National Symphony Orchestra of Estonia – has been highly acclaimed by international press, including Gramophone magazine.

Mikhail is regularly invited as a jury member of International Competitions, amongst others, Lionel Tertis Competition 2019, and he is giving numerous masterclasses all over the world.

Mikhail is a prize winner of the First International Viola Competition (Vienna,1998) and of the Elisa Meyer String Competition (Hamburg, 1998). 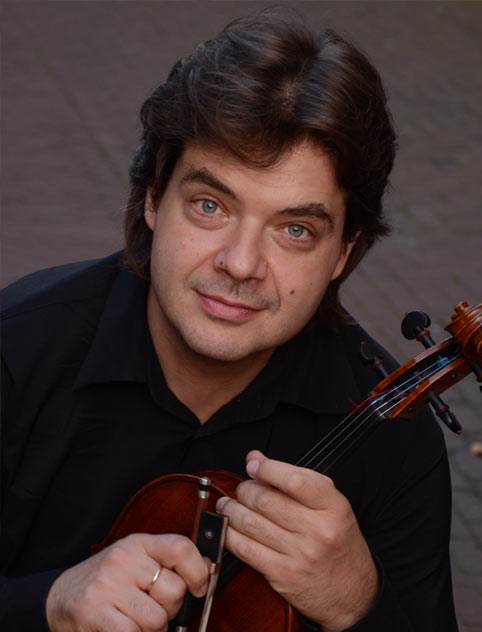