The Hague String Trio was founded by Justyna Briefjes, Julia Dinerstein & Miriam Kirby in 2006. After years of study and working in many countries, including Russia, Mexico, Norway, England, Germany and The Netherlands, all three settled in The Hague. They came together to share their love for chamber music and have formed a strong bond over their many years as an ensemble. The trio enjoys exploring the extensive string trio repertoire, from treasured masterpieces to lesser known compositions which they feel deserve more recognition. They also work closely with composers such as Robin Holloway, Kerry Woodward, Arne Werkman and Reza Nakisa as well as fellow musicians, including oboist Pauline Oostenrijk & pianist Daniël Kramer with whom they play regularly. From season ’21/’22 they will begin a new collaboration with pianist Ksenia Kouzmenko.
The Hague String Trio performs throughout The Netherlands, and gives concerts every year in England and Germany, where it has built up devoted followings. In the summer of 2019 they took part in the festival Rencontres musicales de Champéry in Switzerland.
In February 2019 their CD After the Darkness was released by Cobra Records, featuring music by Jewish composers whose lives were destroyed in the Second World War through persecution, murder or exile. Since its release their recording has received a great deal of media attention, both on the radio and television in the Netherlands, and has received many wonderful reviews: 4-stars from the BBC music magazine, a Supersonic award from Pizzicato in Luxembourg, a 10 from the Dutch classical music magazine Luister, and a glowing review from Gramophone to name a few. After the Darkness was also nominated for the chamber music category of the 2020 International Classical Music Awards.
Justyna & Miriam are both members of the Residentie Orkest The Hague and Julia is a sought after viola pedagogue in many conservatoires in The Netherlands.

Justyna studied at the Royal Conservatoire in The Hague with Peter Brunt, Kees Hülsmann and Janet Krause. In addition to the conservatoire she also studied History of Art for two years at the University of Amsterdam and graduated in 2004 from the Academy of the Royal Concertgebouw Orchestra.
Justyna played frequently as guest principal in various orchestras in the Netherlands such as the Netherlands Philharmonic Orchestra, the Radio Chamber Philharmonic and Nieuw Ensemble and has been a member of the Residentie Orkest, The Hague since 2004, initially as subprincipal and since the beginning of 2021 as principal of the second violin group.
As well as performing in The Hague String Trio, Justyna enjoys performing chamber music in a wide range of different ensembles. She has taken part in masterclasses with Mauricio Fuks, Herman Krebbers and Alexander Kerr and plays on a violin made in 2019 by Andrew Finnigan and Pia Klaembt in Bremen, Germany.

Julia Dinerstein studied violin first with Boris Dinerstein, then at the Tchaikovsky Conservatoire with Elizabeth Gilels and Andrei Korsakov and subsequently viola at the Maastricht Conservatoire with Mikhail Kugel.
She is a keen chamber musician, and member of The Hague String Trio and the Zemtsov Viola Quartet. Julia has participated in numerous international music festivals both as soloist and chamber musician.
She teaches the viola at Codarts Rotterdam, ARTEZ Conservatorium (Arnhem and Zwolle), Maastricht Conservatoire, Musica Mundi School (Belgium), Hellendaal Music Institute (Rotterdam) and Academy for Musical Talent (Utrecht). Julia is a sought-after teacher at European summer music festivals and has given masterclasses all over the world.
Many of Julia’s students have been prize winners in both national and international competitions. She won 2nd prize in the Beethoven International Viola Competition in Austria.

Miriam Kirby studied with Joan Dickson at the junior department of the Royal College of Music, with Melissa Phelps at the Guildhall School of Music & Drama in London and privately with William Pleeth. She finished her studies with Johannes Goritzki at the Robert Schumann Hochschule in Düsseldorf where she gained her Soloist’s Diploma.
In England Miriam worked with the orchestras such as the English Chamber and Royal Philharmonic Orchestras and in Germany was co-principal cello of the Deutsche Kammerakademie from 1994 – 1998.
In the Netherlands Miriam has played with Amsterdam Sinfonietta, toured with the Utrecht String Quartet and been a member of the Residentie Orkest, The Hague since 1998.
She plays a cello made by Bronek Cison in 1996 in Chicago. 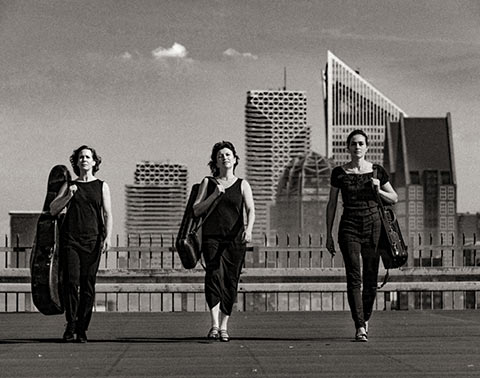 “…The Hague Trio’s accounts of Klein’s Trio, Krása’s Passacaglia and Fugue and Tanec ….. are nothing if not competitive with the best of their rivals. Their ensemble is as tight as their collective intonation is sure, and they bring a keen expressivity to these scores written under appalling conditions.…a thought-provoking programme, captured in first-rate sound…”Gramophone