“The best pianotrio in the world”

The choice of the name Voces Intimae for their piano trio is linked to an idea of music as the realm of a wide variety of feelings, innuendos, shades of meaning. Period instruments are a marvellous vehicle to bring to light all the delicate intricacies of the chamber music repertoire, while remaining convinced that period instruments are all but a tool towards the realization of an idea made of sounds, thoughts, and poetry.

From the summer of 2021, Voces Intimae’s violinist is Simone Bernardini, bringing new energies and perspectives to the long-standing Italian ensemble.

Voces Intimae has been a regular guest in some of the most important concert halls in China, as well as in other prestigious universities and conservatories across the world. In addition, the trio has been ensemble in residence in various festivals and workshops, and is currently the ensemble in residence at the annual Festival Virtuoso & Belcanto in Lucca.

Throughout the years, Voces Intimae has embarked on a wide-ranging recording activity. The Trio’s recordings on period instruments of the complete edition of the trios by J.N. Hummel for Warner Classics were awarded “Critics CD of the Year 2006”, “CD of the Week” by BBC Radio3’s CD Review, “Choice of the Month” by BBC Music Magazine, and “Cdécisif” by the Radio Suisse Romande. The first CD of the two-volumes complete edition of the Robert Schumann piano trios op.63 & 110, again on period instruments, was awarded “Period Instrument Choice” by BBC-Radio3 and “CD of the Month” by Suonare News. The second CD of the same two-volumes recording, this time on modern instruments, was awarded CD of the week by the Dutch broadcaster Radio4, and achieved a great success and several 5-star reviews from both critics and the public, particularly in Germany, the Netherlands, Belgium and the United Kingdom. Voces Intimae has also recorded a very successful CD on the trios of L.T. Gouvy for Challenge Classics – a production commissioned by the Centre de Musique Romantique Français – as well as three CDs for Symphonia, all on period instruments, on trios by F. Schubert, F. Mendelssohn, and a selection of a rare repertoire from 19th century Fantasias for trios, based on the operas of Vincenzo Bellini.

Fortepianist Riccardo Cecchetti is artistic director of the very successful festival Virtuoso & Belcanto Festival in Lucca, where the trio perform and give masterclasses every year. 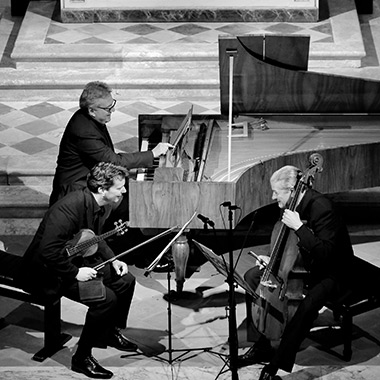 “…a performance of inspired clarity and subtle expression, characterized by a transparent interpretation and flawless intonation…”    “The Strad”

“..the colours and distinctive voices of Voces Intimae are a revelation” BBC Music Magazine – George Pratt